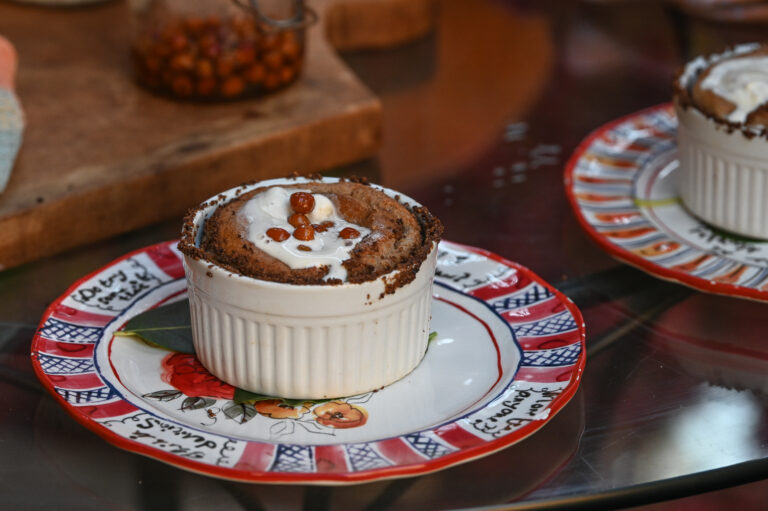 The sweet, nutty and savory nature of this appetizer is what makes it stand out. The moment I tasted the acorn flour, I thought the slight nuttiness might be perfect in a soufflé. The stewed madrone berries provide a slight bitter note to this dish and the sweetness of the honey accents the berries. The blue cheese provides saltiness and the acorn bourbon adds a luscious layer, completing this dish.

Note: Preheat your oven to 400F well ahead of time as its important to have even heat when baking soufflé.

For Stewed Madrone Berries: Combine sugar and water in a small pot. Add madrone berries and bring to a simmer. Cook for 10 to 15 minutes or until the berries soften. Remove from pot and set aside for future use.

For Madrone Tea: Bring water to a boil, pour over madrone bark. Let steep for minimum of 20 minutes. Filter liquid from the bark.

For Ramekins: Using a brush, spread melted butter evenly on the inside of the ramequins. Spread 1 tablespoon of acorn flour in each ramequin by tilting and rolling until evenly coated. Place a teaspoon of acorn nibs and blue cheese directly in the bottom of each cup and set aside for future use.

In a separate bowl whisk egg whites until soft peaks form. Sift in a tablespoon of flour and whisk for 10 seconds more or until smooth. Using a spatula fold the egg whites into the egg yolk and cheese mixture until evenly distributed. Do not overmix.  Divide the mixture evenly between the prepared ramequins, leaving ¼ inch of the cup showing at the top.

Place filled ramekins in a shallow baking pan and add enough water to fill the bottom of the pan. Bake at 400F, until the soufflé has crowned (approximately 15-20 minutes) and they are golden brown. Remove from oven and serve immediately with a dollop of acorn bourbon cream and a spoonful of stewed madrone berries.